My anubias nana has started showing signs of potassium deficiency so yesterday I started supplementing with some API Leaf Zone. It only contains potassium and iron so I will continue to also use the flourish but on another day.

With today's water changes I trimmed and planted stems in all three tanks. The 8 gallon is getting some diatom algae. I sucked most of it out. Thought about moving a couple of my Amano Japonica  shrimp in there to take care of it but I really do not want to add any livestock to that tank yet.

While planting my stems I did note that of the 3 different substrates I am using the plain old Black Diamond is my favorite.  The hardest to plant in is the Flourite. I will never use that again.
Posted by coltpixy at 1:29 PM No comments: 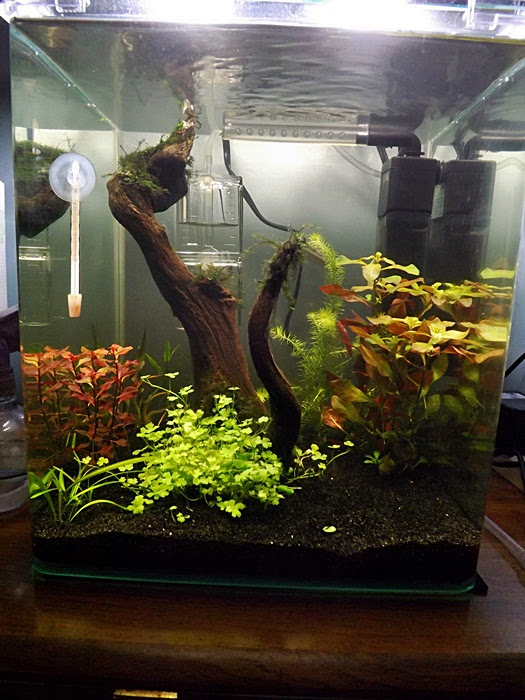 It has only been 7 days and the plants have grown a LOT. I cut off the melted Cryptocoryne walkeri 'lutea' leaves and there are a bunch of new ones. All of the plants are doing really well.I am going to let the stems get just a little bit taller then I plan to trim them down a bit and plant the cuttings.

I am happy with this little mini CO2 set-up and am glad I got it. So far I have been filling the 2 compartments every 2 days.
Adding the 2nd light was a good choice too. While I do like the filter, it seems to have good flow and is very quiet..... I am planning to replace it with a Eheim 2213. I do not like that the stock internal filter tends to come apart if moved. Which means that it will most likely do that when it needs to be taken out and cleaned.
Posted by coltpixy at 11:09 AM 1 comment:

Day one so it is a bit cloudy. 7.9 gallon Fluval EBI tank. I removed the styrofoam rock background because I read too many stories along with photos showing the thing can and will eventually pop out breaking the glass top and light. It can be siliconed in but I thought it looked cheap. It removed very easily with no pressure so I have no doubt it would have popped out.
Extra light and Fluval Mini Pressurized CO2 Kit have been added. Substrate is 20/40 grit Black Diamond. I am using root tabs and liquid ferts. 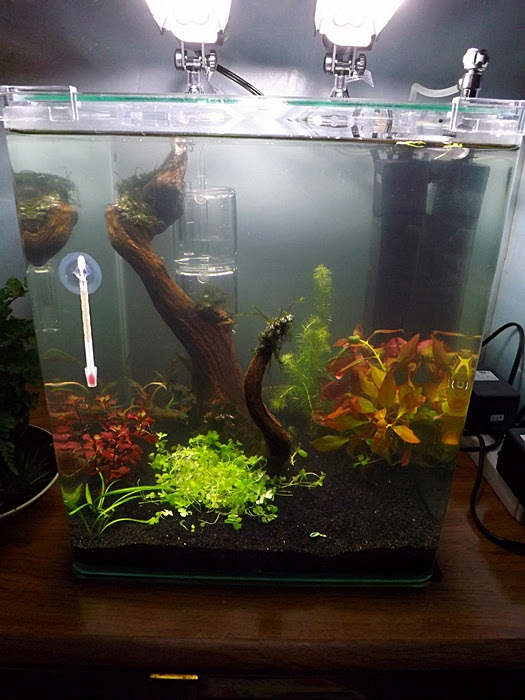 Plant list...
Fissidens fontanus
Ludwigia species 'Atlantis'
Ludwigia hybrid species 'Red'
Hydrocotyle sibthorpioides
Echinodorus bolivianus
Mayaca fluviatilis
Cryptocoryne walkeri 'lutea'
Lobelia cardinalis, Small Form
One little Marsilea quadrifolia that came as a stow away in the Hydrocotyle order. I planted it in the front by itself for now to see if it will take root. If it does I may order some.
I cannot wait for the Fissidens to grow and cover the glue.
Posted by coltpixy at 7:21 PM No comments:

I have resigned myself to the fact that while I appreciate the beauty of some planted tanks I just like too many different plants to be able to achieve their look. My inspiration comes from the floor of the woods behind my house or the fields around me. There are so many colors, shapes and textures all mixed together and I want to see that in my aquariums. Not the manicured lawn of a golf course. While I do find tanks that are highly manicured with only 2 or 3 types of plants to be beautiful I do not find them relaxing. Like I always say, if everyone liked the same things it would be a very boring world. This is a newly planted 10 gallon. I am using Florite Black substrate in it. Since I have taken this photo some of the plants have melted away their emmersed grown leaves and have new submerged leaves in their place. I had not intended to move my betta over here but I had to because of these beautiful little tail nippers aka glowlight tetras. His tail has grown almost completely back now. 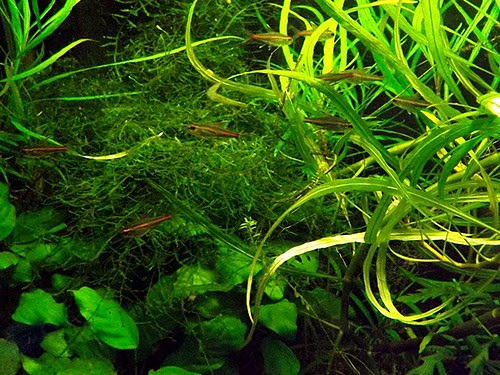 I am about to start up a 7.9 gallon Fluval Ebi tank that I got for my birthday in October. Originally I had thought it would be an all moss tank with many different types of moss. Then I found some plants I just had to have and so now I am going in a completely different direction. In other words I like too many different plants. :)
Posted by coltpixy at 1:51 AM No comments:

This tank has been an experiment and is still running today. I never went completely Walstad with it, I have kept filters on it. It has both an AquaClear 50 and a DIY sponge filter. Some plants did better than others because of the lighting. It has a Coralife Freshwater Double Aqua T5 with one 6,700K and one Colormax bulb. In it I use Flourish comprehensive, Flourish Trace and Flourish root tabs. My water out of the tap is 7.4 so I try to choose fauna that like that ph. I use Prime water conditioner. I have for about 12 years and have never had a reason to change to a different one. I am however going to change out the filters for an Eheim 2215.

I have had freshwater aquariums with live plants for many years. This however will be my first dirt tank. This is not a new idea, people have been doing this for many years. You can read "Fresh-water aquaria" by Gregory Climenson Bateman published 1890, online at Cornell University Library.
For a more recent publication "Ecology of the Planted Aquarium" by Diana Walstad is very good for understanding the science behind it, how and why a dirt substrate works.

There is a lot of information available both online and in books so this is not going to be any sort of tutorial. It is just a journal of my personal experiences. 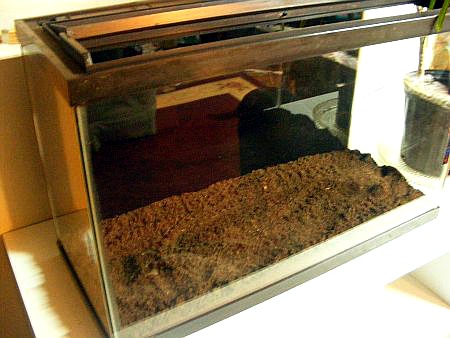 29 gallon tank. I sifted Miracle Gro Potting Organic Choice Soil through a wire sieve to remove large wood pieces. I am airing it out to let it out gas before adding a cap to keep it from just making a tank of muddy water.

Finishing up putting in the substrate in my planted tank. On the right you see the miracle gro organic choice potting soil. The white bits are crushed shell I mixed into the soil. I took this photo while adding the cap. I am using 20/40 grit Black Diamond blasting sand. I washed it to remove the oily residue that comes on it. It is the black you see on the left. 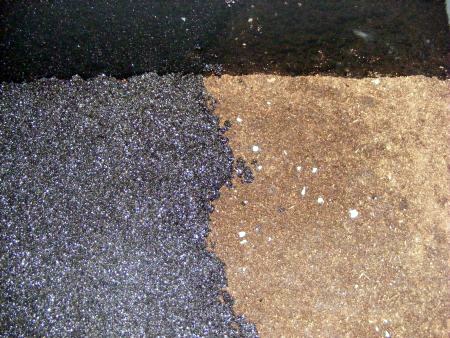 I painted the outside back of the tank with black acrylic. I used to have a piece of black foam board behind it but like it better painted.
Next I will begin planting with what I have leaving space for more that I ordered from one of my favorite sellers on Aquabid. They will be here in a few days.

Sorry about the cloudy pic. I just planted and moved them around a bit. Still not finished rearranging because I have not really settled on how it looks yet. Most of these plants will grow a lot and keeping a photo diary of it will help me keep track of growth and what works as well as what does not work. 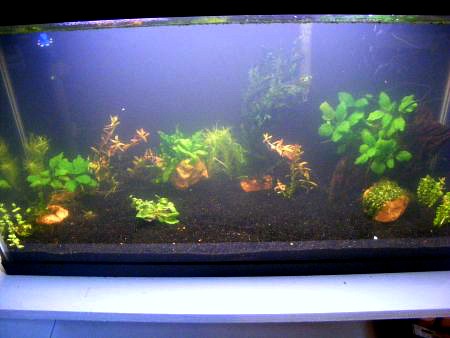 I was not happy with how busy the tank looked so I changed it. I moved the java moss and African fern to another tank and rearranged everything else. While I was at it I trimmed the rotala. 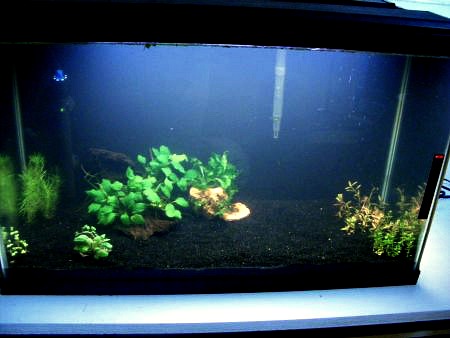 I like this a lot better.
Since I do not have any Malaysian trumpet snails to aerate the soil I carefully poked it with a chopstick just before doing a water change.

I added a fish to the 29 gallon tank last night. Today he acts like a typical veil tail betta. Curious and comes to the side of the tank to check out me or the dogs. However every time I get the camera out he looks at it and either hides in a plant or behind the driftwood. Perhaps I should leave the camera beside the tank for a while so he can get used to it? This is the best shot I could get and it was taken from several feet away. 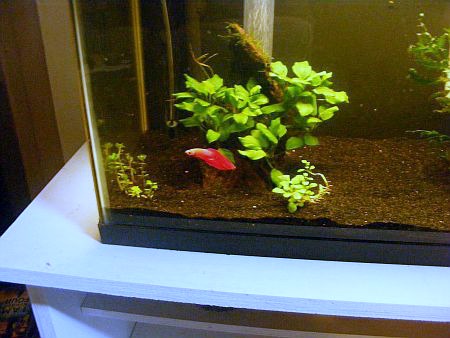 It has been a while since I updated my natural planted aquarium diary. I started this tank in November. Added the walmart rescued veil tail betta in December. Now it is March. Some plants worked out great. Others needed more light than I could provide them. 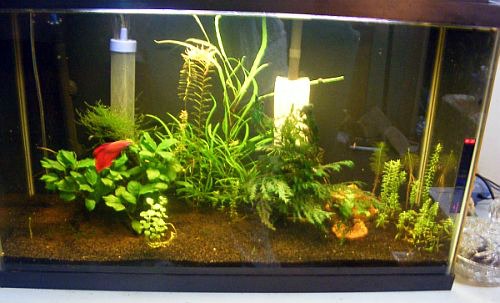 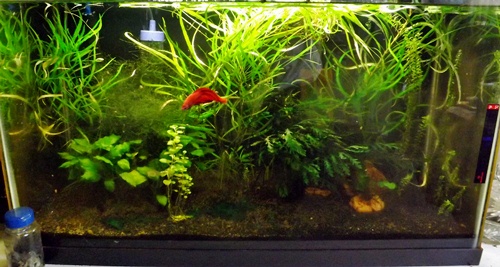 
As you can see some of the plants did better than others. I think this is because some needed higher light. Sorry this post is so long. I figured it would be better to put this all in one post than a bunch of little ones. If You have seen my art blog you know I usually never write long posts.
Posted by coltpixy at 4:36 AM 1 comment:

I started this blog as a journal to keep track of my various garden and planted aquarium trials and experiments. It is not intended in any way to teach anyone anything unless it is to learn from my mistakes. These are just a few of my hobbies. Plants and water, both inside and outdoors, are relaxing to me.

To start out I am going to move some old aquarium posts over from my art blog ColtPixy.com I want to put them here so I can keep track of my tank's progress.
Posted by coltpixy at 3:31 AM No comments:

Email ThisBlogThis!Share to TwitterShare to FacebookShare to Pinterest
Newer Posts Home
Subscribe to: Posts (Atom)
This blog is not a guide. It is merely a journal or diary of my own personal experiences. It is no way meant to be anything other than a way for me to track what works (or not) for myself.
I enjoy planted aquariums and gardening both indoors and outdoors. These are just some of my hobbies and I am by no means an expert.

coltpixy
"Failure is not an option. It is a privilege reserved only for those who try."